How to Wire a Bonsai Pot : Step by Step

Learning how to wire various Bonsai pots is an important skill for Bonsai newcomers to learn.  Unlike most regular plants, it’s a very good idea to add wires to your Bonsai’s pot so that you can secure the tree in place, even if you aren’t planning on wire training the tree itself.

In this guide, we’ll talk you through several different ways of wiring a pot, based on the number of holes at the bottom.  But first…

I.  The Importance Of Wiring Your Bonsai Pot

Why do you need to wire a Bonsai pot at all?  Because Bonsai trees tend to be moved around more than most potted plants.  You will be picking up the pot regularly to trim and shape the tree.  You may be moving it in and out of sunlight during the day.  In many cases, you’ll need to bring outdoor Bonsai inside during particularly hot or cold weather, depending on their tolerances.

When a tree is moved around so often, it becomes a lot more likely to lose its own grip on the pot and start sliding around, causing damage.  Wiring the pot also reduces the chances of tragedy if the pot tips over while you’re working with it.

So, while you technically don’t have to wire the pot, it’s a very good idea and we strongly recommend all budding Bonsai enthusiasts learn how!

II.  How To Wire A Bonsai Pot

Fortunately, wiring a bonsai pot requires a bare minimum of accessories, which you probably already have as part of your kit.  All you need are:

A)a few lengths of either 2mm or 3mm training wire, and

B)some wire mesh with holes big enough for the training wires to fit through.

Since some wire bending is involved, you may also want some pliers to make it easier to work with the wires.  Plus wire-cutters for the wires.

Now let’s look at how it’s done with a few different types of pots.

Pots with two large drain holes at the bottom are among the most common, and also one of the easiest types to wire, so this is a good starting point for establishing the basics.

1.  Cut two squares from the wire mesh which are slightly larger than the holes in the pot.

3. Take one length of 2mm wire and gently bend it back on itself, so it forms a tight U.

4. Thread both ends of that bent wire through one mesh square, separated by a couple mesh holes – but not too far apart.

5. From the underside of the pot, push the wires+mesh through, so that the wires extend upwards through the basin, and the mesh ends up covering the hole.

6. Take the wires and carefully press them along the bottom of the pot towards the nearest side, then push them up the side wall, and finally wrap them around the lip of the pot to secure them in place.  Keep the wire touching the pot as much as possible, so you leave plenty of room for the tree.

7. Repeat steps 3-6 for the other drainage hole in the pot.

So at the end, you should have two sets of two wires, extending in opposite directions, wrapping around the interior of the pot and hooked onto the lip.  The mesh should fully cover both drainage holes.

Now your pot is ready to receive its Bonsai tree!

2. Wiring a pot with both wiring holes and drainage holes

In some cases, such as rectangular pots, it may have two large drainage holes on either side, as well as several (typically 4) smaller wiring holes in between the drainage holes.

Wiring the wring holes is easy, as they should be paired on each side.  Simply take another length of the 2mm wire and thread it through both wiring holes on a side, from the underside, so that the wires stick up through the pot.  Then bend them across the bottom of the pot, up the sides, and around the lip as described above.

Putting mesh on the drain holes is a little trickier here.

2 – Hold the wire at one end in one hand, and move your other hand to about 1/3 from the other end.

3 – Bend that final third of the wire up and over, so it creates a loop, with the end of the wire pointing straight down.

4 – Flip the wire around and do the same with 1/3 of the wire on the other end.  This should create something that looks like a bow, or figure-eight.

5 – Bend the ends of the wires so they’re pointing downwards, perpendicular to the bow.

6 – Thread those wires through a cut square of mesh that fits the drain hole.

7 – From the topside, push the wires through the bottom of the bowl.  This should leave the mesh trapped on top of the hole, with the bow holding it in place.

8 – Flip the bowl over and push the remaining ends of the wires across the underside to hold everything in place.

9 – If you have a lot of extra wire on the bottom, go ahead and trim off the excess.

If the pot has an uneven number of wiring holes, like three, the process is similar to wiring paired wire holes.

2 – Take one length of wire, bend it into a U, and thread it through two of the wire holes, up into the basin.

4 – Take the next length of wire, bend it, and thread one end through the empty wiring hole, and the other end through one of the other occupied holes.

6 – Finally, bend the last piece of wire and thread it through the two remaining holes that aren’t doubled up yet.  This should give you a triangle shape on the underside.

7 – You should now have two wires sticking up out of each wiring hole.  Just bend those around the sides as before.

8 – The pot probably has one or more larger drain holes.  These should be meshed with the same bow/figure-eight technique described above.

4 – Wiring a pot with only one hole

So what do you do if there are no wiring holes, and only a single hole at the bottom?  This is common in small pots, and it’s a little more difficult to deal with.

4 – Wrap each end of the 2mm wires around the 3mm segment a few times, to hold it in place, with the remaining 2mm wires pointing in the same direction.

5 – Take the other length of wire and do the same, creating a U and then wrapping the wire around the 3mm segment a few times.

6 -So you should have a total of four wire ends pointing in the same direction, with the 3mm segment at the bottom loosely holding them together.

7 – Push the wires up through the drain hole, from the underside of the bowl.  The 3mm segment should catch on the bottom, holding the wires in place..  Do not push it through.

8 -Take a square of mesh, cut to fit the drain hole, and thread all four wires through it.  Push the mesh all the way to the bottom of the wires, covering the hole.

9 – Bend the wires around the bottom and sides of the bowl, and over the lip, to secure everything in place.

That’s it.  Between these four examples, you should have all the skills you need to wire up any bowl, regardless of how many holes it has or how they’re laid out.

How Back-Budding Can Encourage New Growth for Your Bonsai 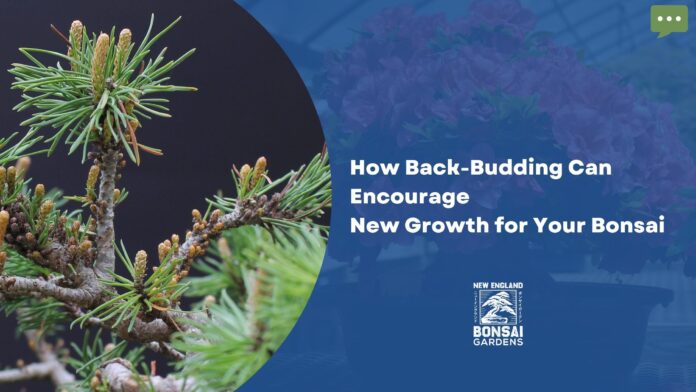 Bringing up Bonsai plants is a very dynamic process. Bonsai plants bring a sense of nature and tranquility to any space you put up. Growing and styling a Bonsai can be an extremely rewarding process.

One of the most crucial aspects of developing Bonsai is how your plant responds to the process of pruning. Other factors like branch breakage (planned and unplanned), disease, freeze damage, and even fire that breaks out in the wild can affect how your plant will thrive and grow.

In some species of Bonsai, these factors will activate the buds that were lying dormant in the shaded areas. This way, you can develop new branches on your Bonsai tree. This technique is called “back-budding” – a method of training bud growth further back along the branch or the trunk of your Bonsai tree. It is done by simply pruning the apical growth. Moreover, if growth is non-existent on some tree branches, you can encourage new growth through the process of back-budding.

Back-Budding is not just a reaction to pruning but pinching as well. Both the processes activate dormant buds back away the parts of the plant where you see active growth happening. So, where does new growth happen? Well, it happens deeper inside the tree structure along the interior branches, crotches, and in a few cases, the main branches of the tree or the trunk.

Keep in mind not to confuse back-budding growth further back in the plant with growth that occurs as a result of light pruning or pinching. The latter will make a plant bushy by activating buds near the active ends of the branch. Merely Pining and light printing is not enough for back-budding. It is done for filling branches and foliage pads. You need to do vigorous pruning to trigger buds further back within the tree.

Is your tree damaged or dead-looking? You can think of undertaking back-budding as a way to enhance the appearance of your tree. Not only can it act as a visual saving grace, but it can also be used to balance the tree’s energy. As you can see, Back-budding can be used to fulfil a host of things.

You should know that some plant varieties back-bud effortlessly, whereas some not so much. Some varieties do not back-bud at all. Even in plants that back-bud, how it happens varies between species.

Some plants that back-bud beautifully include elms, maples, myrtus, myrsine, many junipers, cotoneaster, cypress species, privates and most ficus. Japanese boxwoods do back-bud, but the end result may not be all that appealing. Pines do not back-bud at all, but there are exceptions.

When applied properly, the back-budding process can improve your Bonsai or salvage a damaged Bonsai. The process, however, is less than perfect. Don’t let that deter you.